In The Future, Troops Might Use Eye Injections Instead of Night Vision Goggles

According to an Arizona State University tech expert, nano-particle injections could provide soldiers the ability to see in the night without wearing night vision goggles during nighttime operations.

Nanoparticles that change near-infrared light into visible light were inserted into the mice's eyes, enabling them to see in the dark, the researchers wrote in a summary of their work.

They tested their process by teaching mice to swim over a maze chasing triangular signs. The researchers said mice injected with the nanoparticles could find their way out of the maze in the dark.

The research was a collaboration between a Worcester-based nanoparticle expert, Gang Han, and a Hefei-based vision physiology expert, Xue Tian.

"I definitely believe it will work in people," Xue said in Science magazine recently.

The scientists discovered that the nanoparticles adhered tightly to photoreceptors in the eyes of the mice and remained in place for up to 10 weeks with no apparent lasting side effects, the magazine published.

Arizona State University engineering professor Braden Allenby stated in an email that nanoparticles would benefit from other night-vision technology if they could be carefully injected into warriors. 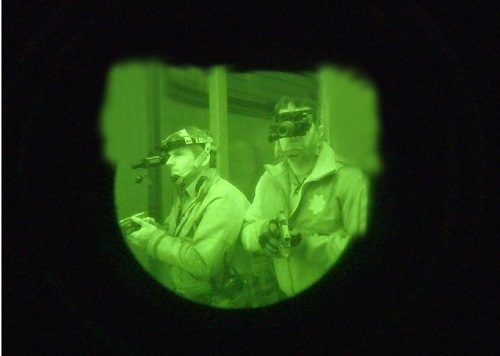 Using eye injections for night vision in soldiers is a temporary procedure,and so it may be less perilous than permanent therapies such as genetically engineering soldiers 'optical systems.

Nanoparticles might be produced to allow the perception of radiation in other wavelengths giving the ability to see radioactive substances to inspectors and customs officials, Allenby said.

Members of a military unit may be equipped with distinct visual capacities. It will be a while before warriors are receiving eye injections for night vision because there has to be a lot of work to be sure it's safe for deployment and works as shown, with humans in the field.