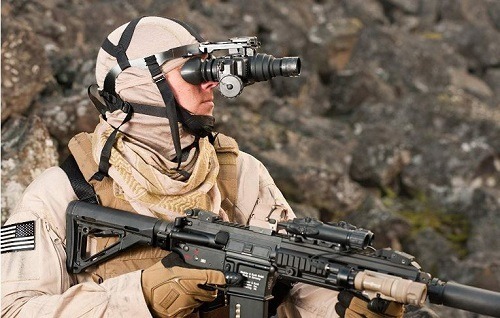 How To Select The Right Night Vision Device For Your Needs

NV monoculars are considered handheld units, though many can be head-mounted as well as weapon mounted.

One advantage of a monocular over a binocular is that you it leaves one eye oriented on the ambient light conditions. This is helpful when moving from dark areas to lighter areas where a night vision device may not be needed.

An NV binocular is like daylight binocular in that it provides two eyepieces and two front lenses and an NV intensifier pipe.

Still, most NV binoculars only utilize one intensifier tube arrangement. If so, it won’t offer more functionality or range than a monocular - but it will provide more comfortable viewing as you are using both eyes.

That said, an NV binocular will be heavier and more expensive than an NV monocular.

An NV goggle is any unit that operates through a headset. These come in three variants:

Monocular Goggle - As its name implies, this type of NV goggle uses a monocular attached to a headset. This is the least expensive and cheapest sort of night vision goggle.

However, as you're using just one optical system and one eye, it won't be as convenient to use as a device with two eyepieces, nor will it provide the same level of depth perception.

Bi-ocular Goggle - These goggles comprise two eyepieces but one lens. This enhances viewing comfort verses a monocular goggle, but since there's only one front lens, there's no in-depth improvement perception over a monocular.

Binocular Goggle - The binocular goggle uses two lenses and two eyepieces. This arrangement provides better viewing comfort than a monocular and offers true depth perception since it's using two different optical systems. This is an essential feature if you're using a goggle while driving off-road, operating machinery or moving about.

Based on the quality of an image amplifier and applied technology, night vision devices can be split into classes called generations. This is a rough division, but it is possible to unambiguously assign a device to particular image quality.

The basic light sensing technology used in a night vision device will determine several things - most notably functionality and cost.

This is the oldest, hottest-running and least expensive technology found in a night vision device.

Gen 1 devices are are adequate for most less-demanding tasks, such as wildlife watching, sailing, outdoor games, or surveillance of a safe area of lesser importance. The low price is the benefit here.

Gen 1 NV devices provide a relatively bright and clear picture, without adding too much to production cost.

Image amplifiers in this class of devices offer about 1,000-5,000X light amplification.

Gen 1+ devices are the most commonly purchased today due to their higher picture resolution, higher sensitivity and smaller image distortion.

Note: Gen 1+ implies a current production tube, not a better grade of a Gen 1 tube.

Features besides the intensifier tube that impact Gen 1 functionality are physical dimensions of the device, magnification (this is a minimal resolution product), and the giveaway nature of the built-in IR illuminator (required by all Gen 1 product).

Also, if you're using an NV in a marine environment, make sure you use a waterproof model because the electronics are sensitive to water damage.

Gen 1 units are easily identifiable. Gen 1 components need a few seconds to power up or power down and always have some perceptible optical distortions (fish-eye distortion) at the edge of the field.

The detection range is defined as the range where a target will exhibit a silhouette.

Recognition range is defined as the range where a goal starts to show recognizable detail.

For many Gen 1 units, recognition range will generally be 50-75 yards or less for a man-sized object. It's important to understand that smaller objects will decrease both recognition and detection range. 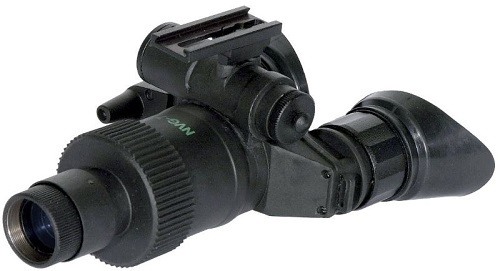 The biggest gain in performance happens between Gen 1 and Gen 2.

It is an incredible leap forward in quality because of the insertion of an extra microchannel plate (MCP) between the photocathode and intensifier tube. Physical phenomena happening in the MCP causes electron multiplication in the electric field.

The MCP is made of glass covered with holes of a minimal diameter positioned at a specifically adjusted angle.

Due to the metallization of outer surfaces polarized with a voltage of 100-200V, and unparalleled station positioning, every electron collides with the walls (3 to 8 times when passing through the plate). This causes subsequent emission of 2-4 secondary electrons.

This solution makes the image intensifier in a Gen 2 unit far better than Gen 1/1+ (up to 50,000 times better intensification) and offers better image brightness and detail.

The MCP dramatically enhances resolution and image quality and translates into a larger range for recognition and detection, typically adding 50 to 75 yards on both, depending on the quality and type of tube.

Its disadvantage is that a higher production cost results from installing the additional converter, which rotates the image.

Because of considerably higher price, this sort of night vision device is used mainly by professionals (police, border guard, military, or forest guards) to surveillance of essential buildings or hunters for detecting the wildlife.

By using a Gen 2 tube, you’ll get considerably less distortion at the edge of the field, a display with much higher contrast and resolution, better lighting amplification and less reliance on an IR for supplemental light, and enhanced tube life.

Gen 2 also provides more options for the intensifier tube. To test performance on a 2nd Generation Night Vision Device, you want to check for both resolution (lp or lpm) and type of tube.

In particular, the XD Gen 2 tubes, HDT Gen 2 tubes, and SHD3 Gen 2 tubes get pretty close to Gen 3 functionality - but also the cost. These advanced versions help bridge the gap between Gen 2 and Gen 3.

The most-used measure of tube operation, which should always be assessed on Gen 2 tubes and more powerful tubes, is resolution - measured in line pairs per millimeter (lpm).

As the lpm resolution increases, so does cost. 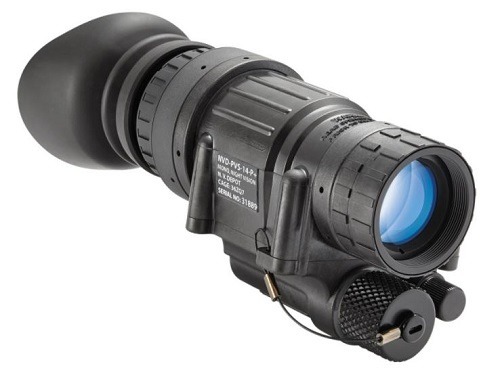 Gen 3 is the highest-resolution night vision technology, so it is the generation currently employed by the majority of military units and other critical responders.

Just like Gen 2 units, there are lots of options and upgrades.

Gen 3 tubes seldom, if ever, have to be replaced and provide long tube life.

All Gen 3 components are modifications to the original AN PVS-7 (bi-ocular) and AN PVS-14 (monocular) used by the army.

Like on Gen 1 and Gen 2, the most important measure of tube performance on Gen 3 components is resolution.

Other measures for grading Gen 3 intensifier tubes include signal to noise ratio and display quality (evenness of brightness and lack of dark spots).

However, these specifications are rarely listed or mentioned by the manufacturer.

A grading system based on letters is often used as follows for Gen 3.

Intensifier tubes called Mil-spec must meet minimal military standards for all tube dimensions and specifications. Since the roots of NV are military in nature, this is as good as it gets in Night Vision performance. This is also the most costly and hard to obtain a grade of NV, especially during wartime.

The next grade down is known as commercial grade.

A commercial Grade A tube will fall short of mil-spec in 1 measurement, often with just a minor dark spot on the screen. It may otherwise provide as much resolution as a mil-spec tube.

A commercial Grade B tube typically fails in more than 1 dimension, though the lower cost may make it a fantastic option.

This version of night vision optics is rarely available because it although it was developed for the US Army, they chose not to adopt it.

Generation 4 Night Vision Devices are much less affected by bright light like other generations of NV, but tube life is short compared to a Gen 3. Performance is on level with the best Gen 3.

CORE is the first technology made by Armasight.

The image intensifier is created from ceramic mixed with alloys, like in Gen 2/2+, but without the MCP.

This solution combines the principal benefit of a Gen I/1+ unit (affordable price) with the picture quality of higher models.

CORE’s superior features include a higher intensification coefficient, higher sensitivity and larger image resolution - even higher than in the Gen 2/2+ devices.

Blur and other image distortion troubling cheaper models have also been removed.

Due to their ceramic core CORE, ™ night vision units are also more resistant to mechanical damage than units based on glass components. 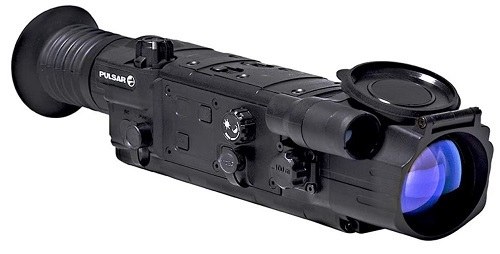 Digital Night Vision (DNV) works on an entirely different principle than the models mentioned above.

DNV units have no intensifier tube, no photocathode, and no phosphorous lamp.

These parts are replaced with an electronic light-sensitive CCD matrix (like matrices used in digital cameras or video cameras).

The picture from the matrix is processed and presented on an LCD installed in the device's eyepiece.

When your job depends on light sensitivity and quality, excellent digital night vision devices can be purchased at a cost between I and II generations.

They also provide a variety of unique functions such as contrast modification, brightness, and color palette adjustment and displaying information on the LCD display (e.g., reticle).

Their main benefit is a virtually limitless converter lifespan and insensitivity to bright light.

Like any other electronic product (digital night vision) category, improvements are being made quickly.

The first of the digital NV products to appear were on a par with a standard Gen 1 unit.

The benefits of going digital are many.

A digital monocular with Gen 2 functionality will be less than half the cost of a normal 2-night vision monocular.

Digital NV products come in all sizes and shapes, too. There are binocular, monocular, binocular, riflescope, and even clip-on.

The Pulsar N750 is an excellent digital riflescope, for example.

As a result of this limitation on resolution (display sharpness), magnification in night vision products is limited.

In brief, the issue is that as magnification increases, picture quality in night vision decreases. Excess magnification in this technology diminishes the image to the point of being useless.

The field of view, image steadiness, and ease of use are also better at lower magnifications. 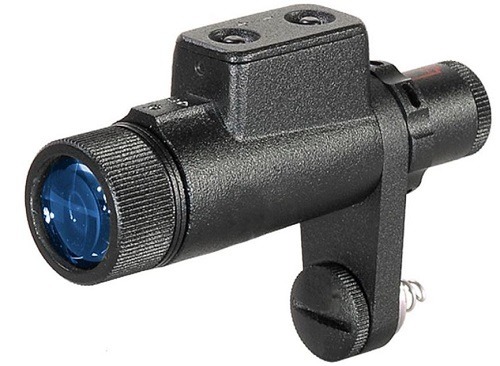 IR illuminators were initially designed to provide supplemental light for close up work, such as reading maps and, as such are limited in their power, despite advertising claims to the contrary.

For instance, a 450 milliwatt version offers roughly half the wattage of a standard penlight flashlight.

An IR illuminator is vital for any night vision unit used in complete darkness, for example, in the boundaries of a darkened building where there's no ambient light.

All Generation 1 units need the assistance of an IR for most applications.